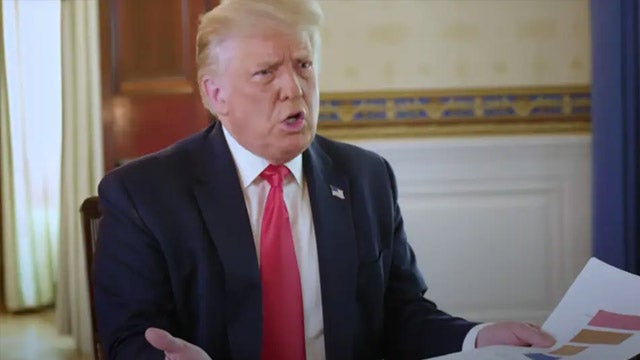 Anyway, they've got this TV show on HBO and last night Trump appeared on it. I don't know why. I have no idea why. But the Drive-By Media is now savaging Trump as demonstrating he's out of touch -- it's about COVID-19 -- he doesn't know what's going on. They can't figure out how he thinks, it's worse than anybody knew. They say Trump was just confused and totally disoriented and telling the host, a guy by the name of Jonathan Swan, that you can't do that. You can't interpose numbers like this.

And the guy said, "Why can't I? I can do whatever I want." And the guy, the host, figures out how Trump thinks at some point during the -- we got sound bites here. We'll play it for you to give you an idea. But the Drive-By Media is already savaging this as a great living example of how Trump has no idea what's going on about anything. And I don't know why he did it. I mean, Axios is not what you would call from the friendly side of the aisle.

But then again I'm sure there are people at the White House who say to Trump, "Look, you can't just do Fox all the time. You gotta go out there, and especially as we get close to the campaign, you've gotta broaden the base, so to speak." So we'll get to that here in just a couple of minutes.

First off the headline: "U.S. Sees Fewer Than 50,000 New COVID-19 Cases for 2nd Day." And you know where this story is? The story is at UPI, United Press International, hardly anybody uses it anymore. They used to be in competition with the Associated Press way back in the day. And they've gotten smaller and smaller. They've changed ownership over the years. I don't know who owns UPI now, but I do know that they are not widely distributed. And they are the ones who have the story.

There will not be a day that goes by without you being flooded with news that is designed to panic you, scare you, frighten you, depress you. So that's why this kind of news is not widely out there today, because it suggests progress. It suggests the economy should not be shut down again. It suggests that mail-in voting isn't necessary.

The Democrats need fear so they can create chaos, so they can take advantage of a crisis that they like to amplify. But the news is: "For the second day in a row, researchers say new COVID-19 cases in the United States have numbered under 50,000.

"About 45,400 new cases were recorded Monday, according to data from Johns Hopkins University, the first time since late June with two straight days under 50,000. There were about 47,500 on Sunday. U.S. cases averaged about 60,000 per day in July," the number is down by about 15,000, which is trending in the right direction.

And this is one of the areas that Trump got into trouble with the Axios people. Trump is a realist. He deals with things as they are. I am a realist. I'm Mr. Literal. I am the mayor of Realville. You know me. One of my all-time favorite, little, short, philosophical sayings: It is what it is. 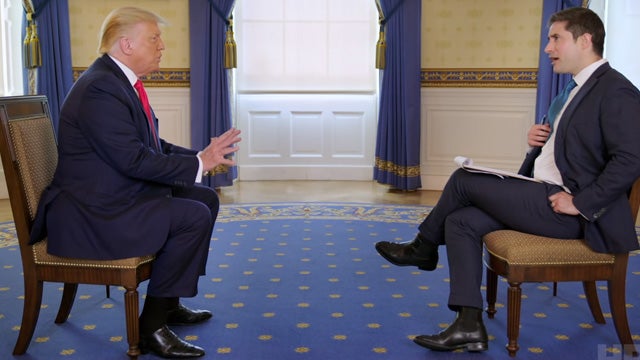 A lot of people can't, especially if it's at all considered bad news, a lot of people don't want to deal with that, particularly in politics. They'll find a way to dress it up or make it look like something that it isn't. The Democrats will try to find a way to make it look worse than it is, which is literally what we're dealing with every day with the Democrat Party.

Now, here's President Trump. Yesterday he repeated that a strategy of a longtime or permanent lockdown was never an option to defeat the coronavirus entirely. He said it's important that everybody recognize that a permanent lockdown is not a viable path toward producing the result you want, certainly not a viable path forward. Lockdowns do not prevent infection in the future. They just don't. It's gonna come back many times. It's gonna come back. Quote, unquote.

There's not a single thing in that statement that's untrue. However, my guess is, remember the news that we had last week that the average American thinks 30 million people have already died from the coronavirus. Nine percent of the population. Why do they think that? Because they watch the news. They see all the new cases announced every day. To them new cases equals death. That's the way it's being reported. New cases is being reported as some of the worst news that could ever be.

Why is it bad? Well, because everybody gets it dies. They don't come out and say it specifically. It's implied. And people are in fact drawing the inference. And so the lockdown, a lot of people believe the lockdown was to stop the spread. The lockdown was to arrest the spread of the virus. It couldn't do that, and that was not the intention of the lockdown. The purpose of the lockdown, again, was to spare the hospital system, was to give it a break. It was to limit the number of infections so that hospitals would not be overrun with people suffering from the virus, particularly back in the early days when not as much was known about it therapeutically as is known now.

Wolf Blitzer, "When does this all end? Mr. Friedman, when does all this coronavirus stuff, when this all end?" And you know what Friedman said? He said it ends in November. Exactly as we predicted. It ends in November when the election's over, all of this panic is over. When the election's over, we have accomplished our mission or we have not, but that's when it's all over. Just flat-out came out and admitted it.

But lockdowns do not prevent infections in the future. Without a vaccine and without therapies, if you lock yourself down, if you quarantine yourself, which you're free to do, and you decide to reappear, say, six weeks later, two months later, you're just as exposed as you were before you locked down. Because nothing has changed about the infectious nature. There isn't a vaccine yet. Nothing's changed other than you have sequestered yourself. But at some point that's gonna end. You can't quarantine yourself for the rest of your life.

So the idea that locking down or sequestering people, quarantining is gonna stop the spread or is gonna stop the virus is nonsensical. Lockdowns do not prevent infectious in the future. Keep that in mind. That's Trump. It is what it is. Let's go to the audio sound bites. We're starting here at number 2. The Drive-Bys are going nuts about this, as I told you, because of how Trump says it. But you tell me after you hear this, is Trump right or wrong?

He makes the point that we're not eradicating this virus anytime soon. This is the epitome of it is what it is. This is the epitome of dealing with reality. He said we have to learn how to treat it, and we're making progress. We're having all kinds of advances therapeutically in how to treat it. So what difference does it make how many cases. What's important now is deaths per case, but that's not how Axios and the media want to tabulate it.

THE PRESIDENT: I think it's under control. I'll tell you what...

SWAN: How? A thousand Americans are dying a day.

THE PRESIDENT: They are dying, that's true and it is what it is. But that doesn't mean we aren't doing everything we can. Right here, the United States is lowest in numerous categories, we're lower than the world.

SWAN: Lower than the world?

THE PRESIDENT: Lower than Europe.

RUSH: So they're talking past each other. Trump is comparing the number of cases not as a proportion of population. He's using it in a much different way. But even before you get to that, the point here, did you notice Trump said, "I think it's under control. I'll tell you what -" (imitating Swan) "Under control? There's a thousand Americans dying a day." 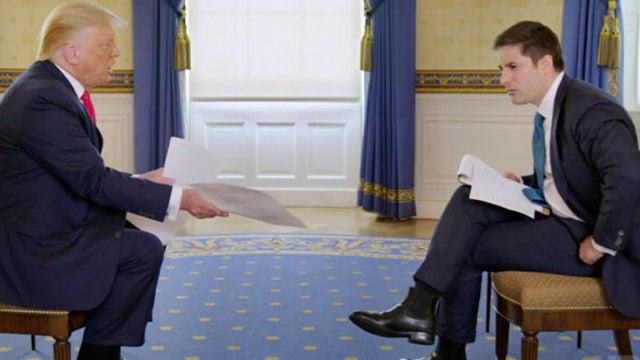 "They are dying. That's true. It is what it is. But it doesn't mean we're not doing everything we can. Right now we are the lowest in numerous categories." So both things can be true. The death rate can be what it is, and yet we can be doing everything we can at the moment. We have the ability to use what is at our disposal as best we can. They want you to believe that as long as people are dying, that Trump isn't doing enough, that Trump isn't doing anything. As long as people are dying, then Trump is losing and Trump is incompetent.

But COVID-19's something brand-new. It's a political weapon to be used against Trump. And every death the Democrats and the media can portray as a Trump failure. Trump's looking at it like realists would look at it. We have people dying every day. We're doing everything we can to, A, come up with a vaccine, B, come up with therapies, B, treat people who come down with it. But the death rate per capita, the death rate per population, no matter how you tablet it, is coming down with COVID-19.

Who gives a flying you-know-what what Twitter users think? Twitter users are largely robots. They are not representative of a majority of thinking of the American people. But they provide the Drive-By Media with a fake attempt to portray majority public opinion by quoting whatever the hell is going viral on Twitter or whatever Twitter users are saying. A bunch of nameless, unidentified, faceless people.

Twitter isn't even a poll that they can fake. All they have to do is go look at a couple of feeds, "Twitter users stunned at -" you see how it gives them an opportunity to do a story? What this really means is we at the Huffing and Puffington Post hate this guy. We don't like this guy, we think this guy, Big Orange Man needs to go.

But they can't theoretically come out and literally speak this way, so they put what they think, what they want in the voice of invisible, unidentifiable, anonymous Looney Tunes in their basements, in their pajamas, on Twitter. And that is supposed reflect majority public opinion in the United States.

There was no full-blown lunacy in this interview. It's real simple. Donald Trump is looking at the death rate as a proportion of the number of cases, and the guy from Axios was trying to get Trump to comment on the death rate as a proportion of population. Well, why would that be? Well, because of the news we had last week. And I wish I remembered, what was it, the Pew Research Center, or was it Gallup? Somebody has this poll out that the average American -- they didn't even give us a number -- the average American believes 9% of the population has died from COVID-19.